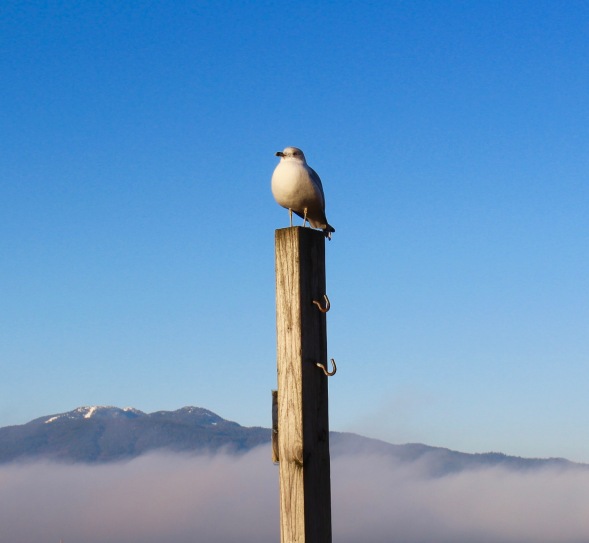 Have you ever watched a Seagull (or flock of Seagulls) in action? It can be quite entertaining.

A few times a week, I shop at my local market which is situated on the Waterfront.  On any given day, it’s saturated with Seagulls (so I get entertained on a regular basis).

While the Seagull can be known to be dirty, a bit savage like, and downright annoying at times, I realized there are a few things about these pesky birds I actually admire.

Departing from the market one day, a mass amount of Seagulls were in the parking lot making their presence known. The lot is between the Market and the Marina, so there’s always a lot of activity.  As I got into my car, the 2 perched on my roof were loudly engaged in some kind of debate. They continued to squawk and made no attempt to move, even after I started my car.  I found myself imagining them as an old married couple.

I started to pull away when I noticed there was a Seagull perched on almost every car in the lot!  It appeared they were taking some kind of a stand, or perhaps just trying to make a point that we humans were an annoying invasion on their turf…(given the location, they may have been right).

I realized how they didn’t care about anything going on around them…not the cars, or all the people coming and going. They just went about doing their bird thing.

Aside from the many car toppers, there were quite a few grounders who were aggressively parading around on the hunt for food. Some of the flyers circling by, swooped in pretty low which caused the tourists snapping photos, to dart and duck for cover. It was a pretty comical scene when you broke it all down.

The next day my husband and I did a beach walk where I came across this solo traveler.

There was something about him I was drawn to…I took a few photos, then watched him for a couple of moments. He just stood up there, looking rather content in his solitude.  He remained there perched high above the crowd, quietly observing the unassuming world below. Nothing phased or bothered him from his birds eye view.

When I got home later, I studied this photograph and found myself thinking about these ballsy little birds, and how they actually had a few good life lessons to pass along.

I’m a strong believer that both Mother Nature and the Animal world have valuable things to teach us if we remain open.

A bit of recapping on my 2 day bird observation, resulted in a short list of the “Life Lessons I Learned from a Seagull”

I must say after writing this, I look at Seagulls a little differently now.  I have an appreciation for the simple, basic way in which they exist. These birds live life on their own terms, knowing and accepting exactly who they are…

It’s something I notice we humans are often striving to achieve.

For today friends…this is The World as Eye See it

This is a text widget, which allows you to add text or HTML to your sidebar. You can use them to display text, links, images, HTML, or a combination of these. Edit them in the Widget section of the Customizer.
Loading Comments...
%d bloggers like this: